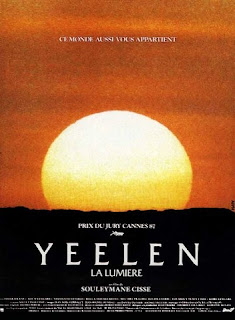 We have seen magical eras of yore from the European part of the world ad nauseam. If you have ever wondered what the other side of the world was living like while knights battled dragons, and Persian bandits flew flying carpets, here's a peek into what may have been happening in the African territories.

In this particular film, "Yeelen", we are told a timeless story of a young wizard who is forced into battle against his equally powerful magician father. Star Wars fans will find that familiar territory, but this one goes in a much different direction. It takes place in the Thirteenth century, in the ancient Mali empire. In the films prologue introduces us to the strange customs of the Malian religious practices:

Komo is the name for a specific kind of sorcery.

Kore is the 7th and final stage of the initiation to become a sorcerer. It is symbolized by a vulture. Its emblem is a wooden horse, a symbol for the human spirit. Its scepter is a carved board called Kore wing.

Kolonkalanni, a magic pylon, is used to find lost things and expose and punish traitors and such.

The Kore wing and the magic pylon, are also magical weapons used in concert. 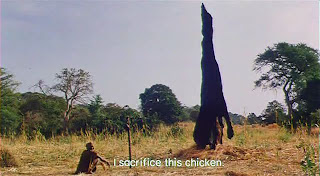 In the opening, we see a sorcerer performing a sacrificial rite to a god called Mari, so that he can find and punish, who we later learn is his own son, Nianankoro. He develops the magic pylon and prepares to seek for his son. Meanwhile, Nianankoro, looking on the reflection of a bowl of water, can see what his father has in store for him, and that he has two men carrying the pylon like a divining rod to find him. His mother implores him to go off and seek the assistance of his uncle. Nianankoro's departure from his mother and home is endearing to watch just with a simple look from each of them that breaks all language barriers.

As his journey begins, he runs into trouble all too soon, when a local village accuses him of being a cow thief. When discovered to be a magician, he is given a chance for reprieve, in exchange for his help against raiding bandits. Nianankoro agrees to use his magical powers to assist the kingdom, and performs a powerful ritual that declares flies and insects against the invading tribes. Nianankoro is released, and in exchange for his help, the king grants him assistance with one of his own beautiful young concubines. Eventually, she sleeps with him, and her king gives her over fully to Nianankoro. Meanwhile, Nianankoro's irate father is fast on his trail. With his "magic pylon" on the hunt, Nianankoro finally reaches his uncle, and realises the battle between he and his father is not going to end as he may have anticipated.

"Yeelen" boasts some impressive cinematography, on behalf of the French film crew (one of the dp's went on to work on a similar film "Buud Yam"), that really succeeded in accentuating the rich colors of the forests, outback, and desert landscapes. As I mentioned earlier, this is a refreshing look at an African culture that gets little to no recognition in the sci-fi/fantasy realm of fiction. Culling the script from various folk tales and legends, Souleymane Cissé does a decent job with the material given him. Though had the film had a larger budget, it's interesting to see what more could be seen. 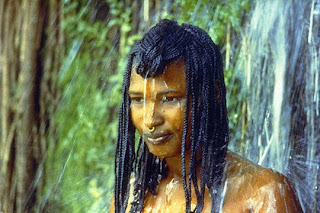